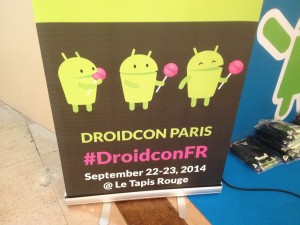 Take a look at the #droidconfr hashtag on Twitter!

The Droidcon is one of the main events about Android development and takes place all over the world. The Droidcon Paris 2014 occurred last weekend in the french capital, organized by the Paris Android User Group and BeMyApp. It was the second edition and the team improved many things compared to last year.

How does it work?

The two days covered by the Droidcon Paris 2014 were mainly composed by talks (46 in total). There has been often 3 at the same time, so you could choose the most interesting topics for you. Speakers from famous international companies were planned: Google, Twitter, Facebook, Microsoft, Square,…

There was also a part of the planning that was empty: the Barcamp. On the Monday morning, everybody was invited to propose his own talk or workshop, about whatever subject linked to Android: programming, design, philosophy,… The planning of the afternoon was made with all the proposals. 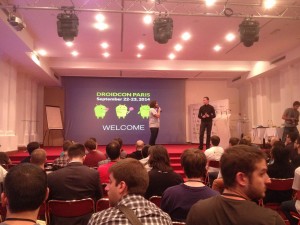 Aside the conference rooms there were also some permanent booths with companies presenting their products. Like that you could meet firms such as Intel, Paypal, Evernote, Amazon, Alcatel, Xebia, Genymobile, ID apps, Octo, …

One other important thing to notice about this event is the atmosphere. It is really geeky and relax! Organizers are cheerful, visitors wear nerd T-shirts and speaker presentations are full of jokes and memes. Moreover, at the end of the first day, an open bar and buffet was offered by Parrot in the bar right next to the building. It was the occasion to meet more people and have fun! 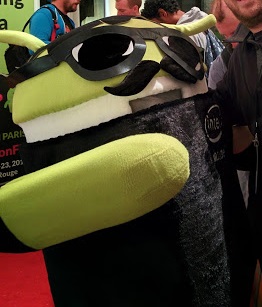 Seems cool! So, what was new this year?

It was only the 2nd edition but the event is already mature. Here are some points different from the first edition: 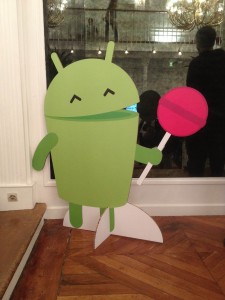 Apart from the talks and the booths, the Droidcon Paris 2014 was also a place to meet new people. I talked with many cool guys and girls, most of the time technical. I chose to promote two of them providing cool services:

My personal conclusion about Droidcon Paris 2014 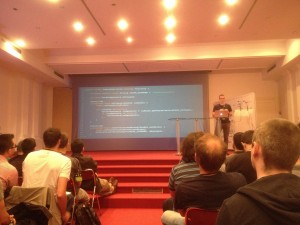 A talk in the main room

Ok but what was the point to go there? Did you learn something interesting?

Yes of course, all these talks and conversations helped me to stay up-to-date about the Android ecosystem. Here is what I will change in my way to make Android apps, after the Droidcon Paris 2014:

Want to know more about the talks ? Go to my next post: Droidcon Paris 2014 talks

One Response to "Droidcon Paris 2014: overview"