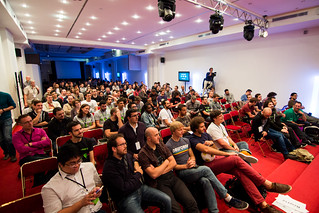 This article follows the Droidcon Paris 2014 overview I published two weeks ago. Unfortunately, I could not assist to all of the talks, because generally they were 3 at the same time. Here is a sum up of the talks I preferred, among those I attended.

Note that most of the photos here are from the Paris Android User Group and BeMyApp. You can find more of their photos on Flickr.

The first talk of the Droidcon is a special moment. Everybody is fresh from the week-end and quite happy to be here instead of sat in front of his computer as a usual Monday. So the atmosphere is relaxed, and the organizers too!

After a cheerful introduction from them, the microphone was let to Alex Danvy, from Microsoft.

What?! Microsoft in a Google powered technology event?

Yes you read well. Alex explained that Microsoft is changing a lot, mainly thanks to Satya Nadella, promoted as the CEO of the firm at the beginning of this year. The new politic is clear: pay more attention to Android.

Actually, few days after that I read this article: “Microsoft unveils $60 TV streaming device for Windows 8 and Android” and Alex told me about the Analog Keyboard project for Android Wear. So it appears to be true that the giant company like our favorite OS.

Certainly one of the most interesting conference of this event. Cyril Mottier, Android expert at Capitaine Train, explained us one of the main issues for Android beginners: the state of an Activity.

Many time during the life of your application, your activities can be paused and resumed. The best example of that is the screen rotation. Each time you turn your device by 90 degrees, your activity is paused and then resumed in the new position. Basically, the reconstruction do not know everything about your application. So you have to specify which data you need to save and where to display them on the new screen. This is possible through Parcelable objects. 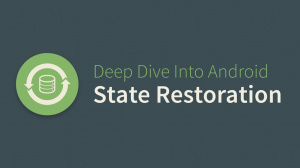 If you follow well the Android Design Guidelines, you should have a good design for your Android mobile application. But what if you want to do better ? Taylor Ling is a Malaysian guy specialized in UI/UX for Android. He gave us an approach to what can be an awesome app, beyond the classic guidelines:

The making of an app: from having an idea to shipping it

I know a little bit Fabien Devos, because we were in the same engineering school. He is a very active Android developer, as his talk prove it. Fabien and a friend developed a mobile app in 4 months, from the idea to the release. What I mainly noticed from his story was the importance of the code review.

At the end of the presentation he announced the official beta release of the game : Hacked. It’s a coding game, with an innovative pad allowing you to easily type code on your touch screen.

This was not a real talk, but more likely an exchange on the subject. Guillaume Vaudaux-Ruth explained that when he released his first app on the Play Store, he was surprised that many users sent him remarks. The question was: how to incite people to give feedbacks and how to process them ?

Many solutions have been evoked: let your mail address in the app, use a form, use a dedicated plugin taking it in charge, contact professional testers,… The conclusion of the session was that it is very important to listen to the users but difficult to get and sort the comments.

When Maciej Górski presented Hrisey, his Android library, it reminds me about the aim of Groovy: make your code more readable. But when Groovy is a brand new language based on Java, Hrisey is a simple plugin that help to avoid ‘boilerplates’.

In short, boilerplates are the main reason why Java code is not easily readable. For example, simple getters and setters are code that are pretty obvious and generic but take place in your code files. Hrisey propose to add small tags instead of this verbose lines and let the code generate itself just before the bitcode baking. The notable feature was the handling of the Parcelable boilerplates.

Geoffrey Dorne offered the Droidcon Paris 2014 its most inspiring talk, in my opinion. Geoffrey is a freelance designer taking part in many projects. He is used to work with developers and know that most of them are very curious about design. For him, design is not just make things beautiful. Design is all about simplifying the life of people. The first mission of a designer is to observed the world around him. He or she has to try to understand why people act in a certain way.

For example, many women put their NFC metro card at the bottom of their handbag to just pass the bag over the NFC reader. This technique allows her to enter the metro without searching for the card lost in the bag. But until now, no handbag brand have designed a product taking this behavior in account. During the talk, Geoffrey gave us a bunch of existing and non existing design solutions.

Tim Messerschmidt from Paypal began his talk with some funny statistics. He showed us the 20 most used passwords (such as “123456”, “qwerty”, “password”,…) and explained that more than half of the passwords on Internet are in this list. Also, password is painful for the user: he has to remember them and type them correctly.

So Tim predicted death to passwords and raise to authentication through trusted third-parties. Actually, the revolution is currently ongoing. Technologies such as OAuth or OpenID are more and more used. That is why we are seeing more and more website allowing to log in with our Facebook, Google or other third-party account.

The Death of the Refresh Button

Wouah! After passwords (see above), we had an other death at this Droidcon Paris 2014: the refresh button has been murdered! And the main suspect is Mathieu Calba, from Capitaine Train.

In his very technical talk, Mathieu explained how critical is the real-time refresh feature and how to implement it in your Android application. Actually the traditional system (AsyncTask or SyncAdapter) is a bit complicate and use many verbose code, but in the new Android OS (Android L), a new object seems to be far better : the JobScheduler

More about the Droidcon Paris 2014

To finish this second article about this event, here is a slideshow coming from the BeMyapp’s Flickr!